The Mercedes Carplay MMi add-on allows you to use Apple CarPlay, Android Auto, Screen mirror and AirPlay functions on the original screen: 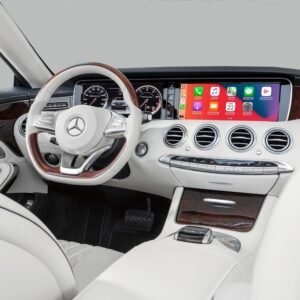 The Mercedes Carplay add-on extends the functionality of your original Mercedes navigation system by allowing you to use the most popular apps such as Waze, Google maps, Sygic navigation, Apple Maps, Spotify, Apple Music, Whats app, Deezer, Podcasts, Sound Cloud or Mixcloud. The accessory connects wirelessly to an iOS or Android smartphone, allowing you to use the Apple Carplay or Android Auto environments for modern cars.

Mercedes Carplay supports AirPlay and Screen Mirror, allowing you to share your smart device’s screen, view photos or videos, and play high-quality video or audio files from a USB stick. Mercedes Carplay has an additional equaliser function that allows you to adjust the settings of the original sound system. The device has its own camera control system to which rear, front or both rear and front cameras can be connected, so if your car didn’t have this advantage before, this is a great opportunity to install it.

No need to replace the original multimedia screen.
Wireless interface via WiFi and Bluetooth or USB connection.
Original functionality is retained – you can return to the original menu at any time.
The original display of car cameras or parking sensors is retained.
Control by steering wheel, original wheel or phone.
Voice control with Siri or Google assistant.
USB interface for playing music or video files.
Hands-free – better audio call quality than OEM.
Sound system equaliser function.
Optional rear view camera.
Easy installation – no need to cut and solder wires, possibility to remove the handset.
Mercedes Carplay is CE/ROHS/FCC/ISO9001 certified.
The unit comes with a 2-year technical warranty.

The Carplay add-on transmits an audio signal to the car via the AUX connector. Please make sure that this connector is available in your car. For NTG5/5.1 models without an AUX connector, a USB to AUX adapter is included.

Wireless Apple Carplay works with all Apple iPhone models running iOS 10 and above.

Huawei phones are not supported or only work with a cable connection.

Join us on social media!